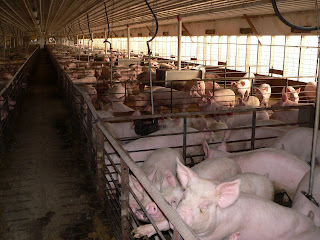 Photo by Sally Kneidel, PhD
I read an article today that blew my socks off - it may be the most significant article I've ever read.  It's online and in the Nov/Dec 2009 print issue of Worldwatch, a publication of Worldwatch Institute - a widely respected think-tank and environmental advocacy organization. The article is entitled "Livestock and Climate Change" (see "Sources" at end of this post).

I've spoken widely, written numerous articles and two books on the subject of the environmental impact of raising and transporting livestock. (See a list my books and blog posts on this topic, below.)  Three or four years ago, I was very excited when the United Nations' Food and Agriculture Organization published "Livestock's Long Shadow" - a scientific document whose authors demonstrated that the livestock sector contributes at least 18% of  greenhouse-gas emissions. They concluded that livestock contribute more to climate change than even the transportation sector does.  I can't count how many times I've quoted that publication, more than 400 pages long, and available on the internet.

This new study goes beyond “Livestock’s Long Shadow”
But this article from Worldwatch Institute goes way beyond the UN's FAO article, and very creditably so. The authors, Robert Goodland and Jeff Anhang, examined the FAO data carefully and explain why their own measurements are more comprehensive and more current than those of the FAO authors. I see no weak spots in these new calculations, they are merely updates to account for the passage of time and our growing population and growing global meat consumption, as well as corrections of omissions in the older FAO article. I have good faith in their carefully detailed figures. I hope to God they're right in their suggestions for solutions.

I'm not going to recount all the new calculations and corrections here, but I will give a couple of examples. First, the FAO's calculations are based on 2002 data, but the tonnage of livestock products between 2002 and 2009 has increased 12%, with a proportionate increase in greenhouse gas emissions (GHG).  Secondly, "Livestock's Long Shadow" reports that 33 million tons of poultry were produced worldwide in 2002, but the FAO's "Food Outlook" corrected that figure, which was actually 72.9 million tons of poultry produced  in 2002.  The authors of the new article describe several underestimates in "Livestock's Long Shadow" such as these, which have a cumulative effect.

As mentioned above, the new Worldwatch document also points out numerous omissions from the original FAO publication, "Livestock's Long Shadow".  For example, the FAO failed to include GHG emissions from
(1) the disposal of livestock waste (feces, urine, bone, fat, spoiled products) all of which emit high amounts of GHG, and (2) fluorocarbons (used for cooling livestock products more than alternatives) which have a global warming potential up to several thousand times higher than that of CO2.  Those are just a couple of examples.

I liked that the article ended with several pages of solutions. The authors pointed out that governments have been largely ineffective in developing renewable energy and energy efficiency. GHG emissions have actually increased since the Kyoto Protocol was signed in 1992, and climate change has since that time accelerated. The authors Goodland and Anhang offer suggestions that would achieve at least a 25% reduction in livestock products worldwide between now and 2017. This would yield a minimum 12.5 % reduction in global greenhouse gas emissions from human activities, which would by itself be almost as much as is generally expected to be negotiated at the U.N.'s climate conference in Copenhagen in December 2009.

Analogs are tasty!  Who needs flesh?

The suggestions of Goodland and Anhang (for Worldwatch) focus on businesses rather governments. They point out that consumers listening to food marketing are listening for words that evoke "comfort, familiarity, happiness, ease, speed, low price, and popularity." Based on that, the authors outline a marketing plan whereby food companies can succeed by marketing "meat and dairy analogs" alongside traditional animal products in grocery stores. Analogs are products such soy- and seitan (wheat gluten) imitation beef, chicken and pork products, as well as soy- and rice milk, cheese, yogurt, and ice cream.  "Analogs are less expensive, less wasteful, easier to cook, and healthier than livestock products," they write. Meat and dairy analogs can be positioned in stores, and through marketing, as "clearly superior to livestock products, thus appealing to the same consumer urges that drive purchases of other analog products, such as Rolex knockoffs".  By replacing livestock products with analogs, "consumers can take a powerful action collectively to mitigate most GHGs worldwide.  Labeling analogs with certified claims of GHGs averted can give them a significant edge."

Sounds good to me! Since Ken and I both work, and I have two jobs, we consume a fair amount of pre-made "analogs" such as Morningstar Farms "chik" patties and chik nuggets and Tofurkey sausage or kielbasa, as well as soy milk, soy yogurt, using ground flax seeds to replace eggs in baking, and so on. We've been doing this for years and I never ever miss meat. I did eat one real chicken nugget a few years ago to test the difference, and found it disgustingly greasy and and containing recognizable animal tissues such as little veins and connective tissue.  After years of eating yummy soy-based imitation chicken patties, the real thing was akin to eating  road-kill. 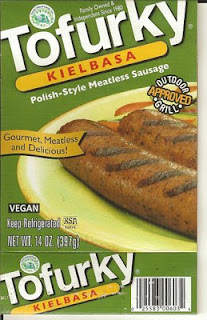 Photo by Sally Kneidel, PhD
I encourage you to read Goodland's and Anhang's article from Worldwatch, available on the internet. To me, their proposal sounds clearly like the easiest and most realistic scheme yet for quickly and drastically reducing the world's GHG emissions, and possibly averting dramatic climate change. Should that change continue unabated as it is now, new climate patterns will destroy wildlife habitat the world over, destroy essential agricultural areas by altering rainfall, cause famine and create climate refuges from developing nations, raise sea levels, and lead to mass wildlife extinctions that humans have never before witnessed.

Roll the article up with a ribbon for the perfect holiday gift!

Read this important Worldwatch article and forward it to your friends. Or print it out and tack it on the bulletin board at work. Include it in your holiday greeting cards!  Or make a nice little cover for it, and give as a holiday gift to those whose future matters most to you.

Sources:
Robert Goodland and Jeff Anhang. "Livestock and Climate Change: What if the key factors in climate change are cows, pigs, and chickens?" Worldwatch 22(6):10-19. Nov/Dec 2009.

My books on this topic:
Veggie Revolution: Smart Choices for a Healthy Body and a Healthy Planet. 2005. Sally and Sadie Kneidel. Fulcrum Books.

Some of my prior posts on this topic:
"New study: meat impacts climate more than buying local"  May 23, 2008 on Veggie Revolution blog

"Is local food the greenest choice?  New study says no"  May 14, 2009 on Veggie Revolution blog

"10 hot tips for a green and energy-efficient holiday." Oct 10, 2008 on Veggie Revolution blog

"The virus is a swine flu and has its roots in North Carolina, the land of Smithfield"  May 2, 2009 on Veggie Revolution blog

That's a awesome article you posted.