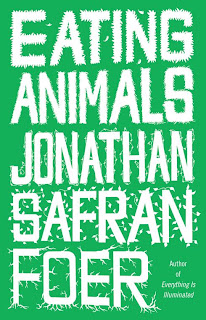 As a biologist and co-author of two books about the meat industry, I was asked by Jonathan Safran Foer's publicist to review Foer's new non-fiction book Eating Animals. I confess I didn't want to read it, because the topic can be distressing. But I'm glad I did. It's among the best books I've ever read on the topic: remarkably thorough and well-documented.  From the first page, the quality of Foer's writing impressed me. Foer is a novelist, and his talent for telling personal stories was evident throughout. He used his own uncertainty, and his need for answers, to pull me into his journey of discovery, an investigation motivated by the birth of his son.

Among the book's strengths were long quotes from his conversations with people who work with livestock, or work on behalf of livestock. He interviewed factory farmers and farmers who raise livestock more humanely, animal-welfare advocates and animal-rights activists, making clear distinctions between the different points of view, and letting all of them speak for themselves. Foer quoted significant passages from the writings of Michael Pollan and Gail Eisnitz, and described the fascinating work of Temple Grandin. I thought he did a great job of getting at the essence of each person's perspective, and identifying contrasts.

Since I write and blog about diet and livestock myself, I can't say I was surprised at anything I read.  But I was yanked back into full awareness of all the issues, all the arguments, and the disturbing aspects of eating animals. My friend Beth, also a vegetarian, read Foer's book and pointed out that he helps us see how we all rationalize what we do. That's true - and he started with his own rationalizations, which made me as a reader more willing to examine my own.

After I finished the book, I let it sit for a couple of days, and what rose to the surface for me were his descriptions of animal abuse in the meatpacking industry. I've always felt that many controversial issues in our culture, even medical topics, can be resolved simply (for me) if I ask myself about any suffering involved. Which choice will cause the least suffering?

That query can be applied here too. Does raising livestock for consumption involve suffering? It does indeed, on a scale that rivals any other source of suffering on the planet. If you doubt it, read Foer's book. Raising livestock will eventually cause the suffering of every being born onto this planet, human and nonhuman, because raising livestock is responsible for 51% of annual worldwide greenhouse-gas emissions. (Foer's data on that are out-of-date, which is not his fault since the book went to press before the latest analysis by Worldwatch Institute.)  Greenhouse-gas emissions will eventually cause mass-extinctions of wildlife, widespread drought and starvation, inundation of coastal cities, climate refugees, etc.  As time goes on, the global community will become less and less tolerant of Americans' disproportionate consumption of resources (including meat) and our disproportionate generation of waste.  Who knows what lies in store, but change is a-coming, and the livestock sector is largely responsible.

To make one more point on the subject of suffering - where is the suffering in not eating animal products? There is none. As Foer wrote, quoting animal-rights activist Bruce Friedrich, "I certainly agree that if someone is going to eat animals, they should eat only grass-fed, pasture-raised animals - especially cattle. But here's the elephant in the room: Why eat animals at all?"  Indeed. Why?

I highly recommend this book and feel grateful to Foer for the time and effort he invested in covering so vast, so troubling, and so vital a topic. I think his book should be part of every high-school science (or literature) curriculum. What a difference that might make. I can see how the birth of Foer's child could motivate his momentous undertaking; this important volume could impact the future of my children, your children, and our grandchildren from here to the end of our planet.

Some of my previous blog posts on the meat industry:
Livestock account for 51% of annual worldwide greenhouse-gas emissions.

Ground beef: a risky choice for families and the planet.

Is local food the greenest choice?  A new study says no.

This virus is a swine flu and has roots in N.C., the land of Smithfield

Meet your Meat  A 12-minute video narrated by Alec Baldwin.