Second wave of H1N1 declining in numbers but not severity; third wave may be worst 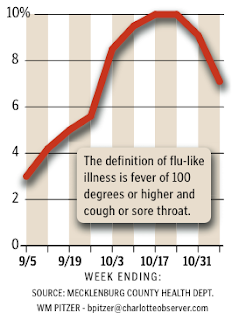 November 18, 2009
See this post now on the front page of www.basilandspice.com


I talked with a knowledgeable nurse friend yesterday, a woman who takes care of the health needs of hundreds of teenagers.  She sees patients all day long every day, many of whom have flu.  She told me yesterday that H1N1 is waning at present.  But it's expected to peak again in another month or two. In the next wave, she predicted, much or most of the U.S. population who haven't had H1N1 will get it - at least, those who haven't been vaccinated.  She said successive outbreaks of a pandemic flu within one year tend to be worse with each successive wave.

Her comments jibe with articles I read today in the Charlotte Observer and on the CDC web site. The CDC says that visits to doctors for flu-like illnesses have decreased nationally for the last two weeks, after climbing for the previous four weeks.  But, says the CDC, "Total influenza hospitalization rates for laboratory-confirmed flu continue to climb and remain higher than expected for this time of year. Hospitalization rates continue to be highest in younger populations, with the highest hospitalization rate reported in children 0-4 years old. The proportion of deaths attributed to pneumonia and influenza....continues to increase and has been higher than what is expected for six weeks now.....Almost all of the influenza viruses identified so far [this fall] continue to be 2009 H1N1 influenza A viruses." [As I reported in an earlier post, pneumonia is the usual cause of death in fatal H1N1 cases.]

So, apparently, the total number of cases has been dropping nationally for the last couple of weeks, but is the H1N1 virus becoming more virulent?  More dangerous?  What else would lead to higher hospitalization and death rates, in spite of dropping numbers of people infected?

Which leads one to wonder about the vaccine.  The limited supplies are supposed to be going to pregnant women, children 6 months and older, young adults up to 24, anyone with a chronic medical condition, health-care workers, and emergency responders.  Yet, that's not always happening.  I went over to my local County Health Department a week ago to get a shingles shot (at least 6 people close to me have had shingles in the last year!), and while I was there, the staff asked me if I wanted to get an H1N1 shot.  I said no, because I'm not in a high-risk group. Corroborating my experience, there are numerous reports in the newspaper of lower-risk people being offered shots.  No one's too upset about that right now. But that could change. I would like to get the vaccine for myself and my family before the January wave hits. Wouldn't we all?  I looked on the CDC web site under "2009 H1N1 Influenza Vaccine Supply Status" dated 11/17/2009.  Unfortunately, it's remarkably not helpful, almost as if they intended to make it indecipherable. I just want to know, when will the vaccine be available for everyone who wants it?  Will it get here before the next wave, which will likely have higher mortality rates?

My previous posts about H1N1:

Why is swine flu likely to return in winter? It's not because we're cooped up together in winter  5/8/2009

This virus IS a swine flu and has its roots in North Carolina, the land of Smithfield   5/2/2009