A Great Student Opportunity
In June of 2009, Ken and I helped out with a biodiversity survey in South Africa. Most of the researchers were undergraduates from universities in the U.S. All of them had already taken a semester-long ecology course in South Africa offered by the Organization for Tropical Studies or OTS, whose home base is at Duke University. (Many of the students were also from Duke.) Dr. Laurence Kruger is the Director of OTS's South African course, and a friend of ours for the last three years or so. He lives in Kruger National Park, South Africa, and takes his ecology students all over Kruger Park and to other important ecological  sites and interesting indigenous villages in South Africa, such as Welverdiend and Hamakuya. Most of what I know about South Africa, I've learned through Laurence or his employees and connections. 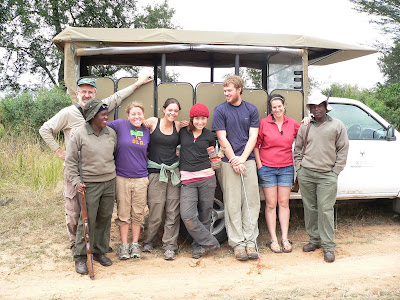 The photo above shows part of the biodiversity crew in the field. L-R is Ken Kneidel, guard Oneeka with rifle, students Allison, Sarah, Caroline, and Seth, OTS instructor Taryn in red shirt, and guard Steven Khosa with rifle over his shoulder. An OTS truck is in the background. The survey was funded by NFS, under their "Research Experience for Undergraduates " program.

Setting Up the Temporary Traps
Everyone involved in the survey was staying at Skukusa Rest Camp in Kruger National Park. The first morning at 7 a.m. we piled into a couple of trucks and drove 2-3 miles to an undisturbed area along the Sabie River. At eight different sites, we set up drift fences and drop traps to catch small animals such as frogs, toads, lizards, snakes, insects, mice, shrews, small rats, insects and other invertebrates. We also set out 16 live-traps for small mammals. The next morning, early, we went to check all the traps at all eight sites. All the little animals were measured, identified and released. By park regulations, we had to have two armed guards with us at all times, in case of encounters with angry hippos, elephants, Cape buffalo, cats, rhinos, wart hogs, baboons, or other big animals. One of the guards was our old friend from 2007, Steven Khosa, a biology student and park employee. Ken and I had hired Steven to be our personal guide in northern Kruger Park in 2007, and he was fabulous. We learned so much from him about his culture, as well as wildlife. The other guard for the biodiversity survey in 2009 was the friendly Oneeka, also a park employee, who was interested in everything we caught. 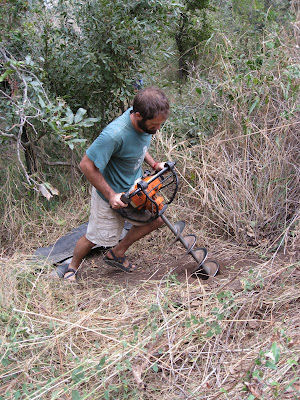 Graham, director of field operations for the South African OTS course, dug the holes for every drop trap, with this heavy power drill (above). The holes had to be big enough to accommodate big buckets sunk to ground level. 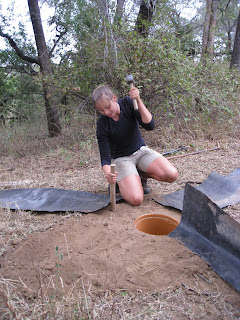 After the central bucket was sunk at each site, REU student Hannah (above) and others pounded in stakes to hold up the three plastic fences that radiated outward from the central bucket. The fences, about 1 foot tall each, are called "drift fences." At least, that's what they're called in the States. I used drift fences for my doctoral research at UNC, studying the breeding migrations of terrestrial salamanders, Ambystoma opacum and maculatum. 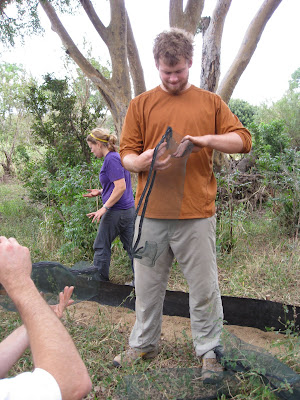 REU student Seth (above) made tubular traps of fiberglass windowscreen mesh to lie alongside each drift fence, to catch reptiles moving along the fence. Each end of the tubular traps had an inverted funnel of mesh, to allow entry but deter exit. 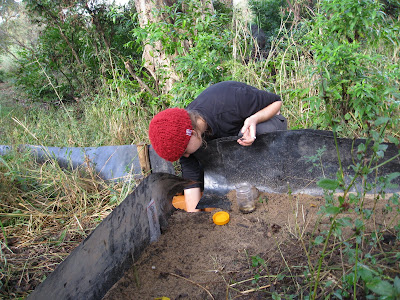 When we returned the next morning to check the traps, REU student Caroline (above) and others checked for animals in the buckets. Each of the three fences or "spokes" that radiated out from the central bucket had another bucket at the other end. When little animals encountered the fence, they crawled or hopped alongside the fence, eventually falling into one of the buckets. Caroline was studying insect diversity, so she always had a glass jar to carry insects back to the lab to ID.

A New "Old World" Lizard for Me

I don't think we caught any snakes because it was winter there in the southern hemisphere, but we did catch a few lizards like this ground agama (Agama aculeata) below. Lizards in the family Agamidae are the "old world" counterparts to the lizard family Iguanidae found in the Americas.

We also found a variety of frogs and toads, some of which were really different from any I'd seen in the States. Seth knew what all of them were - he was our student expert on reptiles and amphibians. The burrowing toads we caught, Breviceps, were my favorite (below). They looked like grumpy old men. Most of them were covered with damp sand, from burrowing. 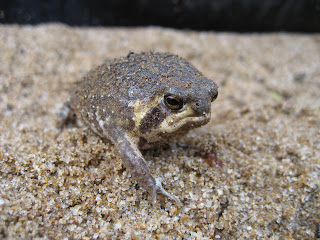 Other favorites were the tiny shovel-nosed frogs, below (Hemisus marmoratus). Like Breviceps, they are burrowers in the sandy soil on the floodplain of the Sabie River. 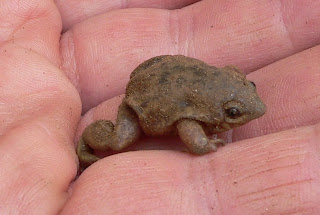 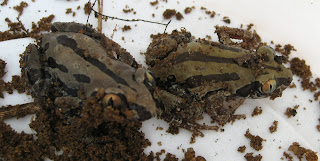 In one of the buckets, we found two beautiful frogs with luminous eyes (above). This frog's common name is the bubbling kassina, or Senegal running frog. Scientific name: Kasina senegalensis. 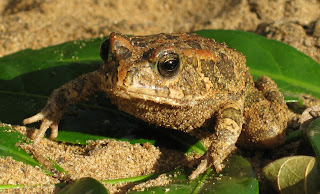 I think this is a flat-backed toad, Bufo maculatus, found in one of the buckets.

Allison was studying mammals, and every time we caught a mouse, rat, or shrew in one of the buckets, she picked it up, marked it with a red marker (to identify it if recaptured), and put it briefly in a plastic bag to measure its weight and length. The bag kept it from biting her (usually). 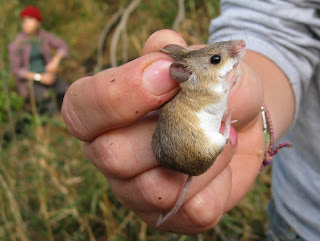 A pygmy mouse (Mus minutoides) in Allison's grasp (above). 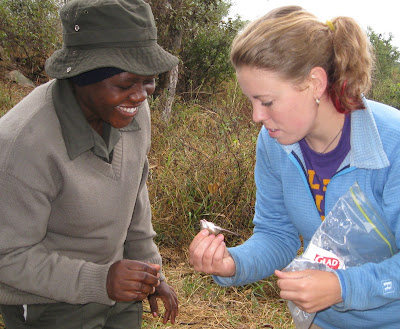 Oneeka and Allison inspect another pygmy mouse (above). 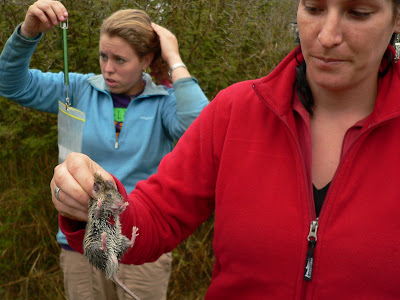 Above, Allison weighs a mouse in a bag attached to a hand-held spring scale; Taryn shows me a red veld rat (Aethomys chrysophilus). The red on the rat's chest is from the red marker. I believe this is a musk shrew (Crocidura mariquensis) inside one of the buckets (above).

What Was the Point?

The overall purpose of the survey, in my understanding, was to assess the effect of differences in the tree canopy on the numbers of animals on the ground below. That is, does a heterogeneous tree canopy support more biodiversity on the ground, or less? I don't know what the answer to that question turned out to be, or if there was an answer. Ken and I left for the north of the park before the project was finished. Of course, the fences and buckets were all removed when the students were through monitoring them, and the holes were filled in. But the data that the students collected will set the stage for future studies by OTS students or REU students. If the process is repeated in future years, the results will show any declines in biodiversity. It's easy to think that, within the park where direct human disturbance is minimal, animal populations should remain stable.

But the Climate Is Changing in Africa.

Rain patterns are changing. Rain affects tree diversity, rain affects the flow of rivers and the deposition of sand along river banks. Who knows how these factors will affect animal populations in a riparian, or riverbank, community? That's the point - who knows? Surveys like this will help us understand the effects of climate change. Some scientists predict that 75% of current species will become extinct within this century. The vast majority of scientists agree that we are facing unprecedented mass extinctions, while at the same time destroying the habitats that could foster the evolution of new species. Field exercises like this are barometers of change. They're important, too, in teaching a new generation of ecologists the techniques they'll need to guide us into an unknown and daunting future. On a lighter note, it was fun for Ken and me to see so many new tiny animals, after spending a lot of time looking for and photographing the bigger ones. These little animals are essential to a healthy and stable ecological community. Each one has its unique charms and its own place in the natural world.