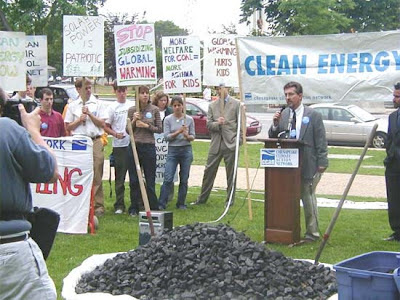 Photo courtesy of peacecorpsonline.org
Here's your chance to meet other global-warming activists in your own community.

The website Step It Up! 2007 is promoting a "national day of climate action" on April 14, 2007. Great idea, and a desperately needed action. Already 920 events are planned in 50 states. The Step It Up 2007 website has an interactive map that allows you to locate the event closest to your home.

Step It Up! is pushing Congress for an 80% reduction in carbon emissions by the year 2050, which is just a 2% reduction per year.

Here is Step It Up's explanation of why they've chosen this particular goal. From their website:

"The latest science tells us that temperatures are increasing faster than expected, and the results are showing up in melting ice caps, intensifying storms, and rising sea levels. America's foremost climatologist, NASA scientist James Hansen, has said that we have just a few years to start reducing carbon emissions, and he's endorsed our goal of 80% by 2050. That won't prevent global warming - it's already too late for that - but it may be enough to stave off the most catastrophic effects.

"While few experts have said explicitly 'we need to reduce carbon emissions 80% by 2050,' we're sticking to this message. Here's why: Scientists have resisted in nearly every case prescribing policy because they don't want to enter the political realm. That's why the Intergovernmental Panel on Climate Change (IPCC) and others won't suggest policy, but rather leave it up to legislators to do the dirty work. That said, Jim Hansen, the Stern Report, the UN Framework Convention on Climate Change (UNFCCC), a number of European countries, the State of California and others (including the new USCAP business-environmental partnership) have either suggested or explicitly referred to 80% carbon cuts by 2050 as a solution commensurate to the scale of the problem.

"And it's possible. The cost of renewable energy is falling fast. New conservation technologies, like hybrid cars, are becoming more available. Many Americans are starting to switch already, but only leadership from Washington can allow this transformation to happen fast enough. And if we begin to get our house in order, then we can play some role in helping China and India steer away from cataclysm as well.

"There are no guarantees we'll succeed. But if we act ambitiously, we have reason to hope."

Step It Up's website (link above) also has suggetions for how to plan an action near you, if there isn't one already planned, and other steps you can take to reduce our contribution to climate change. Americans are right now the world's biggest producers of the greenhouse gases that are warming the planet. But we're not helpless to stop it.