Africa: the race for dwindling resources 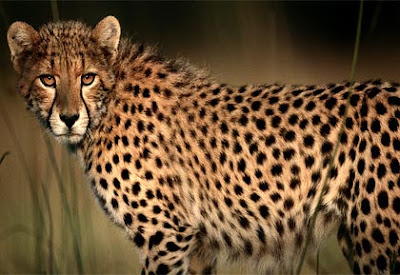 Cheetah photo courtesy of www3.nationalgeographic.com
Any given evening of channel-surfing is likely to turn up a show on African wildlife....hyenas scuffling over a zebra carcass, meerkats socializing, cheetahs chasing antelopes. We're fascinated with African wildlife. Of course we are. No other continent offers the variety of "charismatic megafauna" found on the African savannah. Troll the internet for safari prices, and you'll find many African packaged trips for $7,000 to $12,000 per person. But Americans continue to pony up because we're entranced by the grandeur and drama of African wildlife.

Yet Africa is a continent in serious crisis. It's the only continent where poverty is actually increasing. More than 70% of the world's HIV infection is in sub-Saharan Africa. The AIDS epidemic, as you probably know, has killed so many people in Africa that a large proportion of households in sub-Saharan Africa are missing one or both parents. In many cases, a child or granny is the head-of-household.

The disruption of family and village life by the AIDS epidemic has profound ripple effects throughout African culture and the natural world. Traditionally, rural villages have relied heavily on forest resources, especially fuelwood, but also plants for traditional medicines, and bushmeat, or wildlife for the dinner table. In some countries in sub-Saharan Africa, more than 90% of household energy is from locally gathered wood. For centuries, villagers have harvested only dead branches, and the wood has come from the village commons - the communally owned area around each village. The harvesting of fuelwood, bushmeat, medicinal plants, wood for fencing and household implements and furniture, etc. has been at sustainable rates.

But families without a breadwinner tend to increase their use of forest resources, because such resources are free. In addition, the human population in east Africa is projected to double in the next 55 years or so. So the demand for forest resources is increasing for a number of reasons. The use of many of these resources, including trees for fuelwood, has surpassed sustainable levels. In South Africa, some studies have shown that at current rates of use, fuelwood resources will be exhausted within 15 years.

The demand for arable land is also increasing as human populations increase. Conflicts between the needs of human communities and the needs of wildlife for habitat grow more pressing. Many rural villages depend on livestock for their livelihoods. In east Africa - Kenya and Tanzania - predation on livestock can be a major source of friction between wildlife conservation efforts and community interests. In southern Africa, elephants often damage farm fields, and even invade villages, sometimes killing people. The Nature Conservancy is working with the African Wildlife Foundation toward solutions to these problems. The key lies in finding incentives for local Africans to preserve natural resources, including wildlife, and in finding ways that African villagers can improve their livelihoods through resource conservation. That is a major challenge for the century that lies before us.

On June 5 of 2006, Voice of America's Cole Mallard interviewed Adam Henson of the African Wildlife Foundation on the conflict over the use of natural resources by humans and wildlife in Africa, and solutions that AWF is trying to facilitate. Following is a link to the audio of that interview (less than 2 minutes long) and a written summary of the interview from the website of the African Wildlife Foundation.

Humans vs. Wildlife: How Serious Is the Race for Resources?

The audio of the interview

"Tonight, in our continuing series on the competition for resources between humans and wildlife, these questions: How serious is it? Can a compromise be worked out? Voice of America English to Africa reporter Cole Mallard put those questions to Adam Henson, a program manager with the African Wildlife Foundation in Washington, who said Human-wildlife conflict is one of the most serious threats facing conservation efforts in Africa today. Our mission is to work with the people of Africa to insure the wildlife and wildlands of Africa will endure forever through strategies that create incentives for conservation and opportunities for people to earn a living.

"He says the cause of the conflict is competition for resources between wildlife and people, such as water and grazing areas. Henson says the kind of conflict depends on the region. For example, in East Africa, lions and other large predators devastate livestock, whereas in Southern Africa, large elephant populations raid crops, destroy houses and sometimes kill people.

"He says the way to deal with conflict is through prevention and mitigation. He says prevention involves improving livestock husbandry, and containing of livestock from predators such as lions. He describes mitigation as financial compensation for economic loss resulting from destructive wildlife behavior.

"Henson says it's not the role of the Africa Wildlife Foundation to promote or oppose sport hunting or other similar activities, but to promote a wide range of economic activities that are derived from conservation and that create benefits for local people that can, in the end, sustain livelihoods and, most importantly, protect conservation of wildlife."

Sources:
African Wildlife Foundation. June 8, 2006. "Humans vs wildlife: How serious is the race for resources?" http://www.awf.org/content/headline/detail/1279