One African Family Struggles to Survive 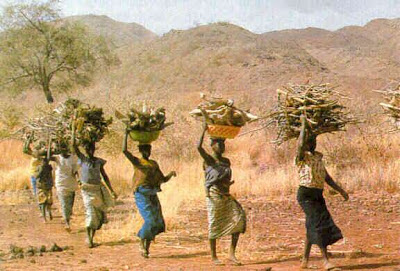 I want to go to Africa. There is little that I want more, other than the health of my children.

For someone who loves wildlife and is intrigued by cultures different from my own, what destination could be more compelling? The fact that Africa's ecosystems are in serious peril makes me all the more desperate to get there before it's too late. I read yesterday, in an article from Emmanuel Koro of the World Resource Institute, that African conservation areas like Kruger National Park could risk losing up to 60% of their species as a result of the coming climate change.

But ecological changes will impact human communities just as much as the they affect the natural world. The early stages of climate change already exacerbate sub-Saharan Africa's pervasive and increasing poverty, through drought and subsequent crop failure as well as degradation of natural resources.

Poverty is one result of natural resource depletion and degradation, but poverty also causes resource depletion. Some of these causes are obvious, some less so. For example, poverty together with political instability means that social programs to improve options for women are often grossly underfunded. Women without access to education, health care, and employment, and the autonomy those opportunities bring, tend to marry in their teens and have large families. Larger families lead to rapid population growth and contribute to the consumption of natural resources at unsustainable rates. The high rate of HIV infection in sub-Saharan Africa also contributes to increased reliance on forest resources.

Below, from the World Resource Institute, is a profile of one family's struggle to make a living, to survive, as forest resources dwindle. Their plight is difficult to fathom in the relative comfort of our 2200 sq ft (average) American home. But it puts a face on the challenges of rural life in an impoverished nation with an average income of less than $2 per day.

(Blantyre, Malawi, February 2004) At 2:30 in the afternoon the Dyeratu family has just clambered down one of the highest mountains near Blantyre, the commercial capital of Malawi. Idan and Feligasi Dyeratu and their daughter, Gertrude, began the trek up the 1,400 meter-high Mount Michiru at sunrise on empty stomachs. Eight hours later and a little more than half way home, they have stopped to take a rest under a Eucalyptus tree, each burdened with a load of firewood that they carry on top their heads.

As Blantyre has grown in size and population -- almost tripling in the past decade -- the forests that blanketed the two mountains around the city have been under increasing pressure. Already the trees shrouding Ndirande Mountain have been entirely cleared for fuel wood and brick making. Families are now hiking to the forests on Michiru for their fuel.

In Malawi, 93 percent of energy comes from fuel wood. Under this pressure, deforestation is not just an ecological threat; women are negatively affected as well. Traditionally, it is women's work to gather wood for cooking. Increasingly, they have to walk long distances to gather firewood. This has consequences for the entire family: as firewood becomes scarce, the nutritional status of families often declines. Limited supply of fuel and energy forces many families to reduce the number of meals they eat and to prepare food that requires less cooking, which is often less nutritious.

Idan says his family climbs the mountain every Saturday so he can sell the wood in the densely populated township of Chirimba. They purchase loads of firewood from forestry officials that are managing a plantation on Mount Michiru. "The exotic pine plantation is benefiting us a lot," said Idan. "I make a profit of about 400 Kwacha [about US$4] per head load carried down the mountain after buying it at 15 Kwacha from forestry officials."

A recent survey conducted by the Wildlife and Environmental Society of Malawi identified poverty as both a major social problem faced by local people, and as a serious cause of pressure on the environment in Malawi. According to William Chadza, head of the organization's natural resources management program, poverty and lack of resources "lead the people to use available natural resources unsustainably."

Chadza cites charcoal production as an example. Around the country, rural communities are rapidly burning their forestlands to produce charcoal, which is in high demand in cities. To make 50 kilograms of charcoal requires 250 kilograms of wood. The disappearance of forests has resulted in massive soil erosion and siltation in low-lying areas resulting in floods during heavy rains. Increased flooding and siltation not only threatens rural communities, it has disrupted operations at the biggest hydroelectric dam in the country, resulting in power outages.

The UN's 2000 Human Development Report ranks Malawi as one of the 10 poorest countries in the world -- 163 out of 173 nations. About 65 percent of the people live below the poverty line, and 28 percent suffer from "severe poverty."

Malawi has a population of about 12 million, with most of the population living in rural areas. Nearly 85 percent of the population is dependent on agriculture, and in 2002 more than half of those people were not able to produce enough food to feed themselves the entire year.

While the country has taken measures to address poverty -- launching a poverty-monitoring system to inform and oversee poverty related issues -- the rapidly growing population continues to exert pressure on the country's natural resources. Until recently, Malawi was home to more than a million refugees from Mozambique refugees who fled armed conflict in their country a decade ago. Further, an influx of firearms from the conflict has helped poachers finish off elephants in Majete wildlife reserve and the Black Rhino in the Mwabvi Wild reserve.

Like the Dyeratu family many people now earn their living by selling fuel wood and charcoal. Idan says business of selling firewood assists his family to buy necessities like food, soap and salt and supports five of his children, who attend primary school and secondary education. However he is not sure what the future holds, when resource that he collects from Michiru Mountain is exhausted. "If the forest officials stops selling firewood from the mountain, then we have to decide as a family, what we have to do," said Idan. (WRI Features, 730 words)


Charles Mkoka (cmkoka@mw.loita.com) is a freelance writer based in Malawi and a contributor to WRI Features.

In later blog posts here, you can read how conservation organizations such as The Nature Conservancy in partnership with the African Wildlife Foundation, the Jane Goodall Institute, and the Green Belt Movement are working to develop incentives to help rural Africans protect natural resources in ways that also support their families. The challenge is immense, but the progress is encouraging. Because poverty and resource depletion are so intricately linked, any solution must address both. To be in some way a piece of that solution......what could be more gratifying or more meaningful?